The Presence of Absent Ones

Previously we mentioned the friendly welcome we received from Carlos Levinton and his research group at the University of Buenos Aires. We’ll write more about what promises to be a very fruitful collaboration with them in later posts, but want to point back to an unsettling experience for us when we first entered the School of Architecture two weeks ago. 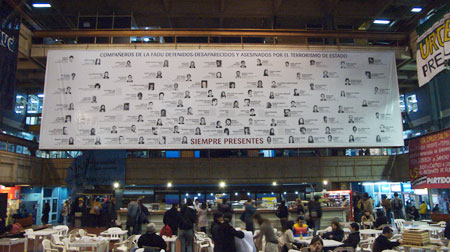 Always Present – Faces of Dead and Disappeared Students and Faculty from the Schools of Architecture, University of Buenos Aires

Hanging above the lobby of the Faculty of Architecture is a stark black and white banner of young faces. They are pictures of students and faculty who were murdered and ‘disappeared’ during the dirty war of the late 70’s and early 80’s, and their faces are a grim reminder of the price of political opposition. Argentina lost a generation of university activists whose ranks are only now beginning to be filled by a cadre of incoming students, some of whom we were fortunate enough to meet shortly after our arrival here. We in North America have not experienced similar repressions or resistances, although we did have our Kent State, our police riot during the Democratic National Convention in Chicago, and mass university mobilizations against the Vietnam War. (I am aware that this sentence excludes the day-to-day experiences of many U.S. minority groups.) These have all but faded from our collective memories, and the notion of the university as a site of learning and engagement seems peculiarly anachronistic. In our talk at the Workers’ Economy Conference we spoke about the university and its original linkages to an educated citizenry who could maintain a democratic and just society. This is one of the ideas that fuels our work here in Argentina and that is continually being reinforced by the people we meet and the work that they are doing. It is an idea worth remembering and speaking about, as are the faces on the banner which simply says: siempre presentes.