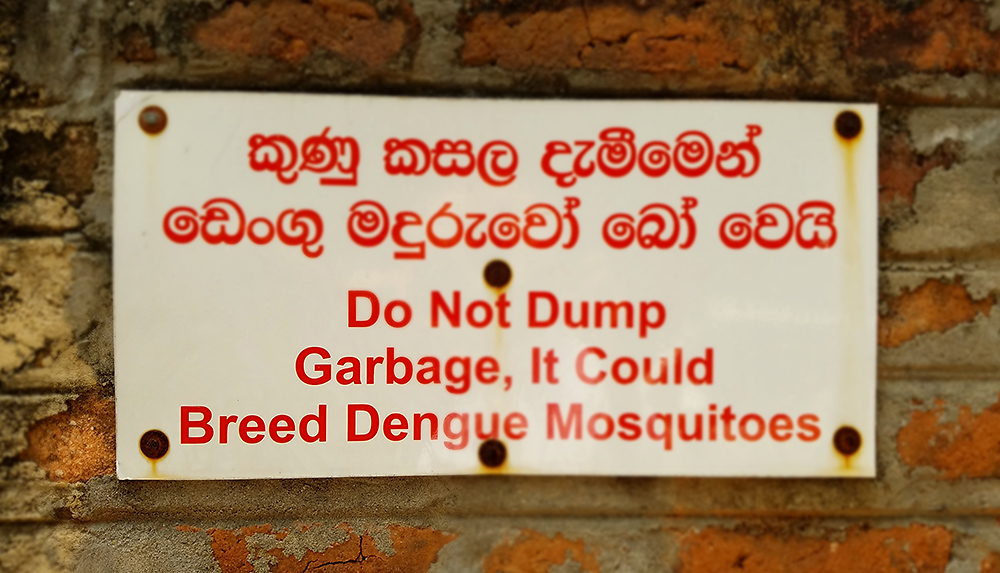 I’m thinking about dengue fever today. I thought about it last week, and the week before that, but I’m more focused today. Let me explain.

For almost three years, we’ve been working on a project whose funding protocols required submission of an extensive risk assessment and mitigation matrix. These can be a pain to formalize but, in my experience, are usually worth the effort. Ours covered space, equipment manufacturing and malfunction, time-to-delivery of a zillion things, staff, faculty, administrative and local government issues, community engagement snafus, protests, rabies, habits of language, availability of potable water and, finally, civil strife because we are proximate to the geographical and psychological aftermaths of a brutal 25-year civil war.

We thought we had accounted for all exigencies, but we didn’t think about weather or disease.

It’s true that flooding and mudslides have disrupted our schedule from the beginning, but with minor adjustments, we’ve managed. Some people haven’t managed. On April 17th, 2017, New Years Day in Sri Lanka, portions of the Meethotamulla dump in Colombo collapsed after heavy rainstorms and a probable methane explosion. It’s estimated that 100 people died. Who knows if all the bodies will ever be recovered? I visited a family that lives on the putrid edge of that mosquito-infested dump. Our team has protested and supported protesters of the dump, but these protests have gone unheeded since 2011.

Three weeks ago, floods submerged two of our team’s family homes. Snakes in the bedrooms, crocodiles out front, all furniture – everything – washed away. That sort of thing. They made due and are just moving back in.

The floods have subsided, but the disease is crescendoing.

Dengue is a vector born disease, which means it’s transmitted by the bite of an infected mosquito. Much of the world’s population live in dengue endemic countries, and it’s the most rapidly spreading mosquito-born viral disease on earth. It’s also one of the best-studied diseases associated with climate change because mosquitoes are especially sensitive to weather and habitat pattern disruptions. They thrive in overcrowded urban environments, and a hostile climate shifts people into cities.

First, there were the meetings that had to be postponed or cancelled because this or that person had been infected; our faculty liaison was out of commission for 1 month; then our Assistant Project Coordinator for Education and Community was struck with the fever; there were the funerals of friends and children of friends that preoccupied our team; we began to cancel or curtail scheduled trips for outside consultants; there were the blood tests: was it viral fever or dengue fever? Cases of the fever have been escalating on the Moratuwa campus, and the student union has been pressuring the VC to shutter the university for weeks. But they’ve kept it open because, in the perverse logic of our times, they feared that closure would jeopardize the university’s international ranking. That is, until an IT Department student died from dengue, which moved the higher-ups to shut down the university from July 1st-17th.

Julie Bishop, Australian’s Foreign Minister (our project is funded by her Department), visited Sri Lanka last week and has pledged $375,000 USD to the World Health Organization to implement immediate dengue prevention, management, and eradication programs in Sri Lanka. Of course this is the same government that pressured the UN to scrub every reference to Australia from the final version of a major UN report on climate change, objecting that the information could harm tourism. And though the $375,000 USD is a laudable gesture, it would have more clout if coupled with an about-face on climate policy and emissions, which the UN has ranked fifth-worst among developed countries, ahead of only Kazakhstan, South Korea, Japan and Saudi Arabia. This is, by the way, the same government that’s fast tracking Adani’s proposed Carmichael mega-coal mine, to be Australia largest, which climate science analysts say will have irreversible repercussions on the environment – from air to groundwater to weather patterns to the Great Barrier Reef (whose tourist dollars the government tried to protect by censoring the UN report mentioned above.)

Not to be outdone in hypocrisy, the Sri Lankan government, which is deploying soldiers, police, and health officials to inspect houses and clear rotting garbage, stagnant water pools, and other potential mosquito-breeding grounds across the county, blames the public for their failure to clear puddles and piles of trash after the monsoon rains. Not a word, though, about the Meethotamulla dump.

You don’t worry much about dengue or malaria if you are living in Maine or France. But as the tropics creep northward and mosquitoes migrate with them, you will. You didn’t much worry about Zika a couple of years ago, either.

WHOs latest update, April 2017, says that 3.9 million people or 52% of the world’s’s population live in dengue endemic countries. The disease has no cure or vaccination.